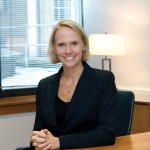 After completing her law degree, Susie tried her hand at banking, property, and corporate law before choosing a career in tax. Seeking greater potential for career progression, she moved to PwC where she is now a director.