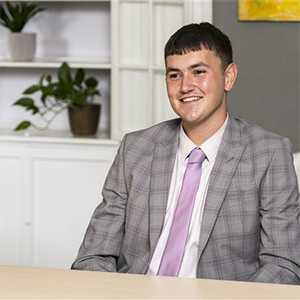 As a sixth former, what made you consider an apprenticeship?

Attending the open evening at Hazlewoods’ offices really opened my eyes and motivated me even more. I had always been set on going to university, but after thinking about what I really wanted, I changed my mind. It highlighted to me that the financial aspect of university with student loans was not appealing but earning money whilst I studied was! Along with the other opportunities Hazlewoods offered.

I do feel that attitudes are changing towards university now and it is no longer the automatic or ‘expected route’ to take after school. My school were certainly talking more about other opportunities like apprenticeships, which I felt was and is a really good thing.

What was your initial experience as a trainee?

I joined with about 12 other AAT trainees and I did not expect to have developed such good friendships with them as I have. It was reassuring to know you were all in it together, working, studying and supporting each other, and you never felt isolated.

When we first started training, they offered a ‘buddy’ support, and it was helpful early on knowing you had someone to go to for anything and they would be there. Obviously, as you start to find your feet and get to know more of the people you work with, friendships quickly develop. As an ACA trainee, I am now a buddy to someone and we have got on so well, that we flat share in Cheltenham together!

How has your role developed and what do you enjoy about it?

Initially, I did not even know what accounting was, but Hazlewoods give you the opportunity to try a few areas to see what works best for you. I soon got to grips with an area that I enjoyed the most – audit.

I enjoy being an auditor as there can be plenty of travel and overnight stays, and communication is key. I am a people person, which I think was picked up in my interview (hence the opportunity to become an auditor) and so being able to build genuine client relationships is great.

It makes the job easier when you can speak to the clients almost as a colleague or friend, rather than an external person you are just ‘dealing with’. No day is the same and there is always a different aspect to learn from.

I have found that if you are keen and willing to work hard, you really do get given opportunities at Hazlewoods. I was chucked in at the deep end which I liked – within a couple of weeks of starting, I was on site doing an audit! Now after two and a half years, I am leading on jobs.

The internal training was great, kicked off really well with two weeks at Kingsholm stadium. It was a good introduction to meet new people and having started straight from school, it felt very much like a blank canvas, ready to learn and absorb everything.

The apprenticeship offered on the job training. I learnt so much more from day to day working than purely from books and study. In books, they usually talk about a perfect scenario, however, you very rarely get ‘perfect’, so real life on the job scenarios and experiences just couldn’t be beaten and were so valuable.

What do you like about Hazlewoods and their location?

The people are great. It is a young team and we all get on really well. I class people as friends rather than colleagues. The social life is good too, with lots of events and opportunities to get together after work.

Throughout the pandemic, we still made an effort virtually with online escape rooms etc., but now we are back in the office, we have had about four socials in two months, so things are picking up again!

The location is great and I enjoy living and working in Cheltenham. I am a big sports fan and Cheltenham has everything on its doorstep from rugby at Kingsholm and some very nice golf courses, through to the racecourse, obviously! During the races, Cheltenham turns into central London, so it has a great buzz.

What advice would you give to someone starting to think about their next steps?

To a sixth former, I would say, really ask yourself the question ‘why are you going to university?’ before automatically committing or exploring other options first. If you have a genuine passion for your subject then great, but I feel opportunities such as apprenticeships should not be overlooked, as I have gained so much valuable experience.